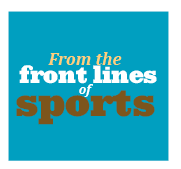 “From the Front Lines…of Sports” is a place for contributors, editors, and readers to share personal stories of their experiences attending live sports events. The posts can explore aspects of the game itself, the feeling of being there, of spending time with family or friends, or anything else connected to the experience.  And it can be any type of sports event, big or small, from the NCAA Basketball tourney with buddies, the SuperBowl with friends, on a baseball trip with your kid, or to a minor league baseball game with the family.

In this piece, Michael Kasdan recounts a couple of football games at Giants Stadium that he and his son, Jacob, attended – separated by fifteen years – which served as bookends to Giants QB legend Eli Manning’s career.

The very first New York Giants game that I took Jacob to was on November 21, 2004. It was just a few days before his 3rd birthday, and I got two free tickets from work.

That game also turned out to be Eli Manning’s first ever career start. It was his rookie year. They played the Atlanta Falcons, who were led by the uber-athletic Michael Vick. Vick ran for over one hundred yards and threw 2 touchdowns, both to his tight end, Alge Crumpler. Manning threw one to his tight end, Jeremy Shockey. The Falcons won 14-10.

What I most remember about that day was:

(1) How long it felt to walk from wherever we parked very far away from Giant Stadium down to our seats, with Jacob mounted on my shoulders; man was I sore!; and

It was a long day, but man did we have a blast.

This past Sunday, we had the good fortune to again be at Giant Stadium for what is likely Eli’s last home game.

It was a special day. This time, Jacob got tickets, and he took me. (No one was carried. Though he did make me drive.)

We tailgated a bit, and went in the Stadium early to watch pre-game warm-ups. We saw Eli jogging into the locker room serenaded by chants, and watched him crack a smile, before he gave the fans lining the tunnel high fives, including Jacob.

In the game, the hometown G-Men beat the Dolphins 36-20, dominating the second half. Barkley was electric, rushing for over 100 yards and 2 TDs that included some flashy ankle-breaking highlights, and the defense chipped in with a big safety. Steady at the helm, Manning led the offense to a dominating second half. Sure, he threw two groan-inducing interceptions and his lack of mobility led to a few drive-ending sacks. But he also threw two nice TDs and led the offense into the end zone four times.

He got a feel-good win for a team that was badly in need of one. And he also got to be recognized by the fans one last time at the end of a storied career that includes two Super Bowl wins.

It’s often not easy being a Giants fan. We are proud of our Super Bowls in 1987, 1991, 2008, and 2012. But there have been a lot of lean years. I’m reminded – in particular – of a very sad six-year old Jacob asking me why the other teams were so much faster than our Giants back in 2010, when the Eagles’ DeSean Jackson returned a punt for a TD with no time left to snatch away a victory from the hapless Giants.

This season and in recent times especially, wins have been few and far between for the Giants. As fans, we’re glad to have spent most of this season developing Eli Manning’s successor, Daniel Jones, and hoping for another crop of able draftees to build this franchise back into a champion. But with Jones hurt, it was special to have a send off like this for Eli.

A really nice day for Eli Manning. Bookends for me and Jacob.

Editors are standing by…

Michael Kasdan is currently Director of Special Projects for The Good Men Project. He has held a number of leadership roles at the Good Men Project over time, including Senior Sports Editor, Lead Editor, and Executive Editor. He is father of two who lives in Maplewood, NJ. Mike’s day job is intellectual property lawyer, but his interests and avocations are numerous. Mike is passionate about education, entrepreneurship and technology, and has served as a board member and advisor on strategic and legal issues to start-up for profit and non-profit companies throughout his career. In the rest of his ever-shrinking spare time, he enjoys focusing his energies on projects and causes that impact the world and our society.

Mike frequently speaks and writes on a variety of topics, including intellectual property, technology, business, social media, sports, mental health, parenting, education, and social justice. He has spoken on a variety of issues in major media networks, including CNN (Headline News), Al Jazeera America, National Public Radio (NPR), and The Canadian Broadcast Company (CBC), and his writings have appeared in well-known publications such as The Huffington Post, Salon, Yahoo! Parenting, The Daily Dot, and Redbook. He enjoys playing basketball, biking, fumbling around on the guitar, and an on-again-off-again relationship with running. Mike spends entirely too much time on Facebook and can be found (over)sharing and linking on a variety of topics @michaelkasdan.