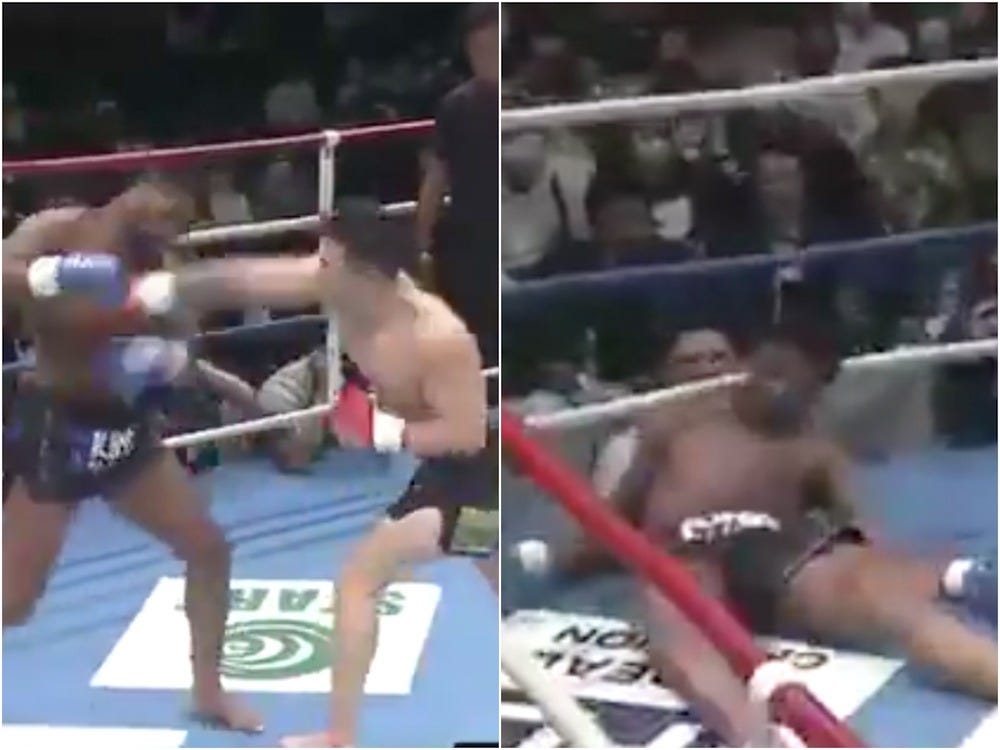 A 26-year-old kickboxer hit his opponent so hard he was knocked out on his feet before falling awkwardly in a heap on the floor, with his neck propped up by the bottom rope.

It all went down at a K-1 kickboxing event in the Saitama Super Arena in Saitama, Japan, at a show called K’Festa, which the MMA website BodyLockMMA likened to the Super Bowl of Japanese combat sports.

Minoru Kimura, a 26-year-old competitor from Brazil, stole the show with a hat-trick of knockouts on Sunday, beating Kaito in the K-1 World Grand Prix 70kg quarterfinal, Eder Lopes in the semifinal, and then Hiromi Wajima in the final – all by first round knockout.

It was his stoppage win over Lopez which produced a highlight-reel moment for the ages, though, as Kimura scored an extraordinary one-punch knockout.

Kimura Minoru sends Lopes into the shadow realm, for his second first-round stoppage of the night. pic.twitter.com/sVBWaQKN0Z

Japan has 1,101 confirmed cases of the coronavirus and 41 deaths in an approximate 10-week period. The Japan Times called the country an “outlier” at odds with many other countries, as there have been 349,211 confirmed global cases of COVID-19, with 15,308 deaths.

The publication reported last week that there had been “cancellation of sports events, the closure of schools, and the shutting down of some, but not all, larger entertainment venues” while the rest of the country continues to operate as close to normal as can be.

The K’Festa show, a sports event, was held after this report and shown in front of a live audience.

But K-1 was not the only combat sports organisation to proceed with a weekend show. In the UK, Cage Warriors president Graham Boylan moved his Cage Warriors 113 event from London to Manchester and put it behind-closed-doors just so, as he said, his staff and the fighters could get paid while providing entertainment for those self-isolating in Britain and beyond.

There were a number of sporting highlights from the Cage Warriors promotion, including a 23-year-old called “Hand Grenade” who bounced his opponent’s head off the canvas like a basketball because of a hat-trick of powerful right hands.

Later, Mason Jones, a 24-year-old mixed martial artist from Wales, extended his unbeaten run with a savage knee strike KO, winning the Cage Warriors lightweight belt which former Cage Warriors fighter Conor McGregor used to wear around his waist before getting promoted to the UFC.

Mike Tyson said he looks forward to death because living is a ‘struggle,’ and takes more courage than dying

Conor McGregor would get ‘knocked out pretty quick’ by Manny Pacquiao, the boxer’s former promoter says

Site highlights each day to your inbox.